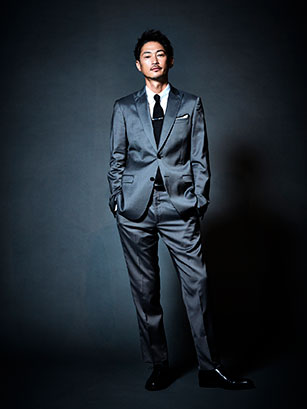 In 1995 the age of 16, Yosuke Kubozuka started his career as an actor in Japan.  He made his debut on a famed crime detective drama series titled, “The Kindaichi Case Files.”  In 2000, he became widely recognized for his unique acting when he starred in the film, “Ikebukuro West Gate Park.”

He has been very proactive in appearing in both Japanese and overseas films.  He featured and played majour roles in the films titled “PING PONG”, “KYOKI NO SAKURA”, “LAUNDRY”, “MONSTERS CLUB”, “HELTER SKELTER”, “THE EXTREME SUKIYAKI”, “1/3”, “TOKYO TRIBE” and “Z ISLAND.”  And, more to come soon.

In 2017, he was cast as Kichijiro, a key character who gave a powerful performance in the film, “Silence” directed by Martin Scorsese and made his first appearance in Hollywood.
He is now expecting to work with Elizabeth Banks in the film, “Rita Hayworth with a Hand Grenade” and will continue to explore further opportunities overseas.

Currently, he is filming ambitious bilingual drama “Giri/Haji,” by Netflix London.
The eight-part thriller, whose title translates as “Duty/Shame,” will make its world premiere on BBC Two in 2019, with Netflix streaming the series globally outside of the U.K.

He has also attracted a great deal of attention in the Asian fashion industry, appearing on the covers of various fashion magazines in and out of Japan since he had started his career as a model in 1995.
In 2017, he was appointed as a model by Adidas Shanghai.
In the beginning of 2018, by collaboration with a Japanese fashion magazine, he was invited as a guest to DIOR’s Paris Collection.

He is also famed for his theatrical performances. In 2010, he made his theatrical debut by playing a lonely terrorist on the stage, “BLOOD IS ASLEEP WHILE STANDING” directed by most wanted Japanese stage director, Yukio Ninagawa.
Since then he has been cast in Ninagawa’s works over times such as “Blood WEDDING” and “CYMBELINE.”  In 2012, for the first time he appeared as Iachimo on the London’s Barbican stage for Shakespeare’s “CYMBELINE”.  In 2015, he starred in the play “THE TEACHING OF KAIJU” directed by Toshiaki Toyoda.  He then reprised his role in 2016.

In the spring of 2018, he had a came back to NHK as a narrator for an ETV documentary called ‘Reborn ~ Drawing the Evolution~’ after 17 years.

Yosuke has also been pursuing his career as a reggae singer by the name “Manji Line” since 2006.  He has been vigorously involved with music activities, performing over 100 concerts a year.
He released his first greatest hits album in 2015 and his sixth album of original songs was released in 2017.
The Manji Line tour in China in the spring of 2018 was a great success.

This year, he has also started his solo talk show “Nonbendarari. ”

His writing activities extends from poems to essays, travel stories, etc.
And, in June of 2018, he published “Kodona no Kotoba” for the first time in 3 years.